Restaurant for Two: a feature where I bring a friend to a restaurant and we write a review together. My friend, John, and I went on a brewery tour at Dovetail in Ravenswood.

Newly-opened brewery, Dovetail, offers excellent 90-minute tours of their craft brewery located in the Ravenswood Corridor. Master brewers, Hagen Dost and Bill Wesselink, studied beer making in Munich and traveled throughout Europe to refine their selections. Their beers are designed for all of the senses so they encourage you to check out the color and take a whiff before you taste.

Having been opened for nearly 6 months, the two owners met in 2011, started dreaming about opening a brewery a year later, and incorporated Dovetail in 2014. The brewery is in its infancy stages, and the owners treat it as such. While there is a startup feel to the business, Dost and Wesselink have a passionate, approachable take on beer.

The friendly Dost led our tour explaining each step in the brewing process which included tastings of the water they use (did you know that beer is 90% water?!) and the malt. And, not for consumption, they had hops plants for smelling. The tour was open and accessible for even the novice beer drinker. 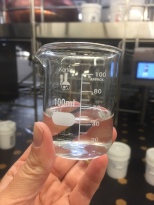 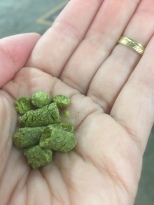 My favorite part of any brewery tour is the beer you get to try, of course! Included with the $15 price is three 10-oz beers which change seasonally or when the barrels run dry. Our day started with their Lager, “a golden, malty, rich, creamy complex lager.” Served in a stein, it was easy drinking. 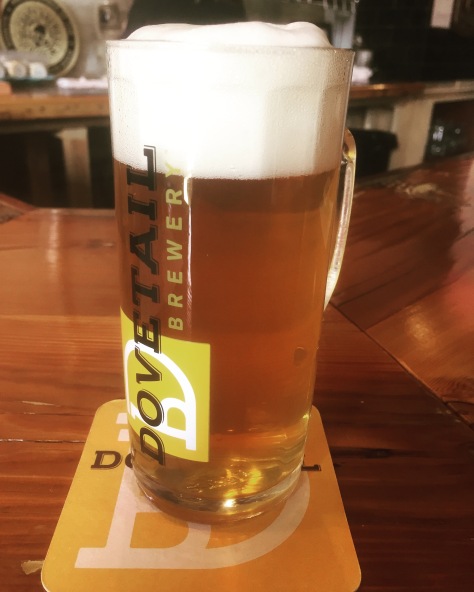 We were lucky enough to try the Hefeweizen, a wheat beer featuring clove and fruity smells.

Lastly, we tried the Rauchweizen, a smoked version of the Hefe. I’m not usually one for dark beers, but this was smooth and had a sweet, chocolatey tone to it.

Dovetail’s beers are self-distributed to a bunch of bars throughout the Chicagoland area in kegs only. While you can get a growler of your favorite brew from the tap room to go, they don’t sell them in bottles quite yet.

After the tour, grab a pint and a pretzel, dried sausage, or homemade alfajore (Argentinian cookies with dulce de leche) for a great rest of your Saturday.

Tours take place every Saturday at 11am, and private tours are available upon request.