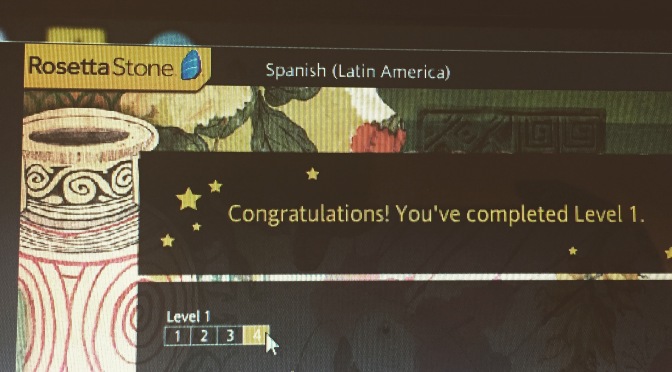 A few hours before meeting Carlos this evening, my stomach was in knots. It was the same feeling I get in my gut on the day of a first date. Except this wasn’t a first date per se; it was a language date. Despite having plenty of friends who speak Spanish fluently, I’ve never actually spoken Spanish with them. Whether out of stage fright or laziness, it’s just never happened. So instead, I joined Conversation Exchange a few weeks back after feeling particularly bold and desiring of Spanish skills. On the site, you exchange messages with people who also want to practice their language skills. I want to speak Spanish and am a native English speaker; my partners desire the opposite.

After multiple messages (a la OKCupid), Carlos and I set up a date to meet in person. Just like first dates, I felt like canceling the entire day. “I am terrible at Spanish. I’ll never need it!” I tell myself all day. And while my back up plan in life is to move to South America, I figured that I can “learn it another day, another time, when I’ve had more practice in the solitude of my own bedroom.”

Since I have been taking Spanish via Rosetta Stone since December and various other forms for longer, I eventually convinced myself that there is no better time than the present to break the seal. To ensure I did not cancel this language date, I texted Carlos this morning confirming our “appointment” to chat in two languages. He agreed. I told him I’d be wearing an orange dress (sounds like a blind date?!) and he a red t-shirt. I arrived five minutes early to stake out the place and “look busy”. And again, just like a first date, after five minutes we were perfectly fine. For the 2.5 hours we were there (which is 1.5 hours longer than we’d planned), we spoke English 85% of the time. But even in those 24 minutes of Spanish speaking, I wasn’t awful. He clearly knows waaaaaayyyy more English than I do Spanish, but he told me that he rarely speaks English – he has Spanish friends (he’s from Valencia, Spain) and works at a job that pretty solitary, so his thoughts are all in Spanish.

It was most likely a success because Carlos was extremely friendly and helpful. It felt like no pressure and he knew that I was not very advanced in my skills so he didn’t push it. Dare I say it was fun??? We didn’t make future plans, but I’m sure I’ll either see Carlos or another new language partner in the near future.