Restaurant for Two: a feature where I bring a friend to a restaurant and we write a review together. My friend, Janelle, and I drove west to check out this new BBQ joint.

In the far western Chicago neighborhood of Dunning sits a new barbecue restaurant called Lone Star BBQ Bar. Deemed one of the top safest neighborhoods in the city, Dunning is more Oak Park than downtown Chicago. Lone Star is beautifully renovated with wood panelling, a long bar and a large outdoor patio. It is a shining gem amongst the older, sagging nearby stores.

Best of all, the quality and taste of the food meets the new appearance. Lone Star is known for their smoked meats which isn’t surprising seeing as their smoker was made in the heart of BBQ country: Texas. The menu is filled with every sort of smoked meat: baby back ribs, brisket, pulled pork, chicken wings, and hot links. Order the BBQ Sampler Platter to try a bit of all of this yumminess. 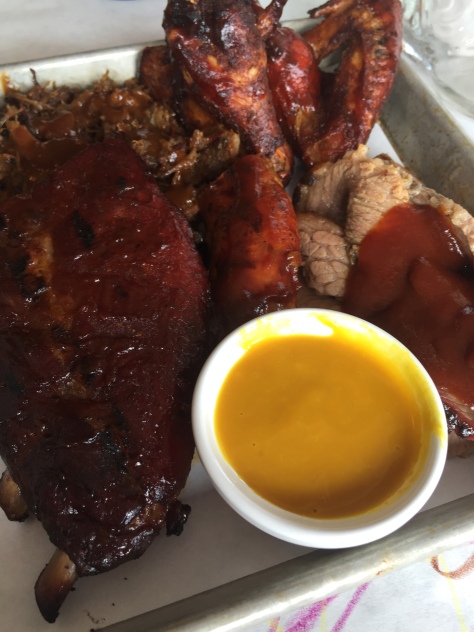 This sampler was served with delicious homemade biscuits that were flaky and buttery – think KFC but better.

Minus the sandwich buns, everything in the restaurant is homemade. From the BBQ sauce to the corn bread to the desserts, all of the food is made in-house. One of these delectable homemade treats was the corn fritters. “It’s like a donut stuffed with corn,” restaurant manager, Alex Wise, commented. And he was right! Unlike most corn fritters found in other restaurants, this one was fried and dusted in cinnamon and sugar. Sounds unusual, tastes like perfection.

Another home run for Lone Star is its desserts. Individually sized but big enough to share, the pecan pie and bread pudding were equally lip-smacking. Both are served hot with a dollop of ice cream melting on top. It’ll be hard, but be sure to save room for the sweets! 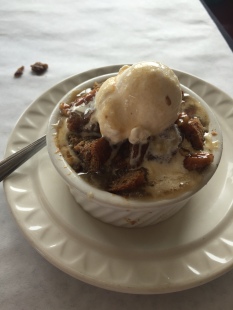 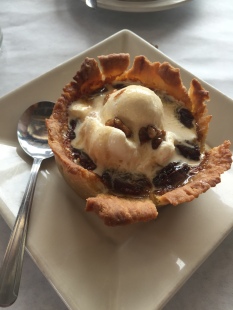 For most of my friends, the biggest deterrent will be the location. But, if you’re out in the western suburbs, sidle up to Lone Star BBQ for delicious eats and craft root beers.