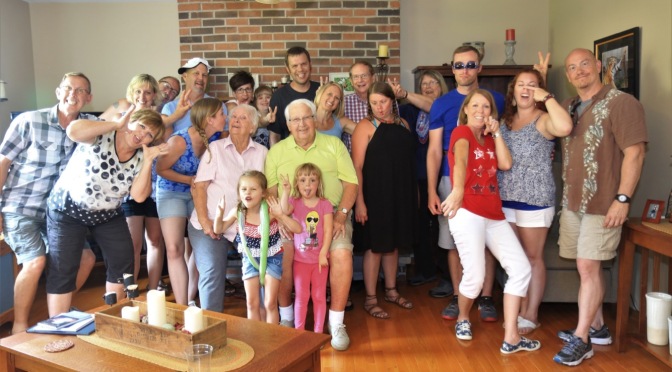 In the spring of 1950, Richard Christensen umpired baseball games for fun. At one such game, Swany Staurland sat in the stands watching her brother, Harold, play. She “looked pretty nice” according to Richard, so after some light digging, he found out her name and where she lived. See, back in the ‘50s you could do that sort of thing without it being strange. It was so normal, in fact, that when he showed up to her door unannounced, both she and her parents agreed that this date was a good idea.

Richard and Swany are my grandparents. The story of this first date and what happened in the 67 years after was shared with me recently.

When I asked my grandma if she knew my grandpa before he knocked on her door after that fateful baseball game, she said, “I did not know him, except I knew that he worked at A&P. And I knew that my dad used to take eggs into that store all the time and he had to take whatever the farmers brought over and look it over, so I knew him that way. As far as talking with him, I hadn’t talked to him, but my folks approved of me going for a ride with him.”

The ride took them to Shabonna, IL where they got stuck in the mud on the backroads.

“It was raining – pouring down rain!” Grandma told me.

My grandpa recalled, “I went up to the nearest farmhouse which was about maybe a quarter mile away and knocked on the door. The lady there knew me from A&P […]. Her husband wasn’t home, so I asked if I could borrow their tractor to get out of the mud and she said yes. So I drove the tractor down there and hooked onto the car and we got free. [Swany] got behind the wheel [to] drop their tractor off. The tractor had a big barrel of water on it; it was splashing all over me in the rain.” Can you imagine?!

After they made it back to my grandma’s house, Richard asked for a kiss: “‘Don’t I get a kiss after all I went through?’ and she said, ‘No!’ and that was the end of that.” We all laughed at that. My grandma sure hasn’t changed in all of these years!

Swany reasoned, “He left me alone in the car in the dark. It was raining and I was alone, but I was scared […]. There was nobody around me. I was stuck in the mud in a car I hadn’t been in before. It wasn’t pleasant there. I certainly wasn’t going to give somebody a kiss!”

Despite the tumultuous first date, my grandparents continued to date. He’d call her every day on the phone just to check in. They went on dates square dancing and to the movies. It took my grandma a little while to fall in love, but my grandpa fell in love in “probably pretty quick.” He said, “I wasn’t infatuated, but I was kinda in love.” He even confessed to his mom that Swany was the woman he was going to marry.

After a summer of dating, Grandpa went into the service and would come back to Illinois from Quantico, Virginia to visit Swany once a month on the weekends. He would also write to her. Grandma told me, “I got a letter from him every day. And I wrote to him. And I saved every letter he ever wrote.”

When he returned from the service, they tried dating again, but according to Grandpa, my grandma told him she didn’t like him and that he was too bossy.

Swany doesn’t quite remember it that way, but did agree that he was “very bossy” so they went their separate ways for “pretty close to five years.”

My grandma went out to California during that time and worked at the Bank of America meeting people from everywhere. Side note: I love hearing the stories of my Grandma living in California; I’m pretty sure she’s from whom I get my wild spirit.

After a little while, my great grandparents called up their daughter and asked if she wanted to go to Norway (their home country) with them. Swany agreed, but spent all of her money on the trip, so couldn’t get back to California. She ended up getting a job at Penney’s in town, and as luck would have it, my grandpa walked by and saw her working in the window and asked her out to the movies.

That was in January 1955. By March, they were engaged. They were at the drive-in theater and while they were waiting for the movie to start, they decided they would get married. And on June 25, 1955, they said “I do!”

So here we are 62 years, eight kids, 11 grandkids, and nine great-grandkids later.

My grandparents have a rare kind of love. Through all of the years, the ups and downs, losing a child and a grandchild, they have the kind of love that grows a smidge more every single day. They are the definition of “finish each other’s sentences.” They have a deep respect for the other person that’s evident in every thing they do. I have always said that I would never settle for anything less than the kind of love that my grandparents have. Here a few more questions I asked them at the end of the interview that really sum up their love for one another.

Ashley: And what is your favorite thing – I’ll start with you, Grandpa – about Grandma?

Richard: She was pretty. That was one of the things. And she wasn’t a hoity toity – she was really down-to-earth. She was my style of a person.

Ashley: What’s your favorite thing about your relationship?

Richard: That we still get along pretty good even though we fight. (laughs)

Richard: That’s a better word, I guess. Because we disagree a lot on cards. (everyone laughs)

Swany: Who wins and who doesn’t.

Richard: She will do what I’d like to do when she really doesn’t want to. That’s something. And I think I try to be congenial at times.

Swany: Very kind. He can be very trustworthy.

Richard: Both of us.

Together: There’s never been anybody else.

Swany: We’ve never had anybody else. You were my one and only. (Richard laughs)

Swany: I said he was my one and only.

Ashley: We don’t have to talk about it. (everyone laughs) Okay, my last question is: Would you change anything about your relationship?

Richard: No, because we’re still here.

Swany: We have what we need.

Together: We don’t want for anything.

Richard: Other than our health. And that’s been pretty good for our age.

Swany: And we are very happy with our kids.

Richard: Yes, all of our kids have been very good.

Ashley: And is there anything else you want to add?

Richard: No, just that we hope we last another 10 years.

If you’d like to hear the full interview, listen below (and please ignore my ditzy moments)