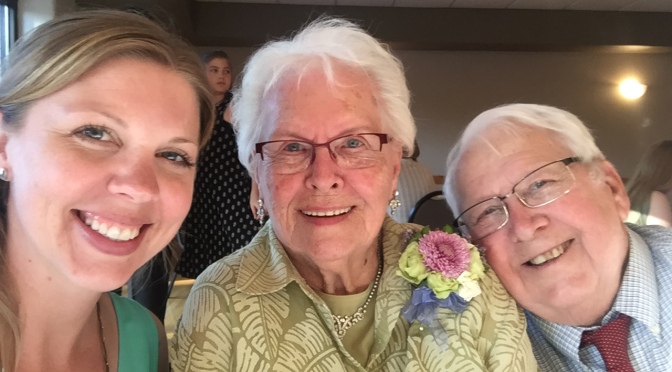 I interviewed my grandparents on August 27, 2017 to learn more about how they met each other, the story of how they started dating, and how they decided they should get married. Below is the transcript of this interview.

Here is the audio of the interview, too (please excuse my ditzy moments)

Ashley: How did you first meet each other?

Richard: In the spring of 1950, I was umpiring a baseball game. Harold Staurland [brother of Swany] was playing in the game. While I was umpiring, I noticed a young lady up in the stands that looked pretty nice. I found out what Harold’s last name was. His uncle used to come in to the A&P where I worked, so when he came in, I asked about Swanhild (Swany) because I didn’t know her name either. He told me where they lived and everything like that, and so I did go out there – or did I call you? I don’t remember first.

But the first time I really met her was when I went out to their place on South University Road. I asked if she wanted to go for a ride.

Ashley: Did you know him, Grandma?

Swany: I did not know him, except I knew that he worked at A&P. And I knew that my dad used to take eggs into that store all the time and he had to take whatever the farmers brought over and look it over, so I knew him that way. As far as talking with him, I hadn’t talked to him, but my folks approved of me going for a ride with him.

Richard: So we went on a ride down to Shabbona and came back some of the back roads and we got stuck in the mud.

Swany: It was raining – pouring down rain.

Richard: I went up to the nearest farmhouse which was about maybe a quarter mile away and knocked on the door. The lady there knew me from A&P […]. Her husband wasn’t home, so I asked if I could borrow their tractor to get out of the mud and she said yes. So I drove the tractor down there and hooked onto the car and we got free. She got behind the wheel [to] drop their tractor off. The tractor had a big barrel of water on it; it was splashing all over me in the rain. And then I took her home.

Swany: He also said he had new shoes on and he had gotten them all wet. (laughs)

Chuck (my dad, their son): How old were you?

Ashley: Grandma, even though you didn’t give him a kiss goodbye, did you have a good first date even though it was a little bit tumultuous or not as planned?

Swany: He left me alone in the car in the dark. It was raining and I was alone, but I was scared […]. There was nobody around me. I was stuck in the mud in a car I hadn’t been in before. It wasn’t pleasant there. I certainly wasn’t going to give somebody a kiss! (everyone laughs)

Ashley: Did you start dating right away?

Richard: I think it was a little while.

Richard: And eventually she broke down. I think we went to a square dance.

Richard: So that was about the first time we went otherwise.

Swany: I think it was Long’s Barn.

Richard: No, I’ve never been to Long’s Barn.

Swany: Oh…somebody else. (gives Ashley a side eye and everyone laughs)

Richard: It was probably Charter Grove which your dad and mother pass every day […].

Ashley: So when did you know you were in love?

Swany: It took a while.

Richard: Probably pretty quick. But I wasn’t infatuated, but I was kinda in love.

Swany: But he told his mother that I was the one he was going to marry. He did tell her that because she told me that.

Richard: She told you that when you went riding with her one time.

Swany: And then I called him Dick because all of his friends were calling him Dick. We were at Sunday dinner at his house. They always had a nice dinner on Sunday that she fixed and she said…we were doing dishes and she said, “I named him Richard. I didn’t name him Dick.” I said, “Oh, I see.” So from then on, I’ve called him Richard, not Dick.

Ashley: Now everyone calls you Richard.

Richard: But for a long time it was Chris when I was working.

Ashley: How about you, Grandma? When did you know that you were in love?

Richard: Love is a different…you’re really not quite sure what love is.

Richard: See, we went together for that summer.

Swany: And he went right into the service.

Richard: And was it…

Richard: I went into the serivce. And that’s when Judy (Swany’s sister) was born.

Swany: And his mother and I remained good friends – his family and I.

Richard: And I would come home…

Richard: After bootcamp, I came home. And I think that was in the wintertime. I got stuck in the snow about a mile away.

Swany: From our house in the country.

Richard: And they came and got me in the Jeep. And after I got to the other campus, I got to come home maybe once a month on the weekend. I’d have leave on Friday night from base and I’d be back at base on Monday morning.

Ashley: Did you come back to see Grandma specifically?

Richard: Yup. Only. (laughs) And many a time it was interesting driving.

Ashley: And where you were driving from?

Swany: But he wrote me a letter every single day. I got a letter from him every day. And I wrote to him. And I saved every letter he ever wrote.

Richard: I threw every letter away.

Richard: I didn’t want the evidence.

Ashley: What did you do with all of the letters?

Swany: I saved them!

Richard: She’s still got them!

Ashley: We don’t have to see them now, but did you save them somewhere – are they in this house right now?

Ashley: And all of Grandma’s are literally all in the garbage?

Swany: I saved them because…

Ashley: Because you knew that 65 years later…

Richard: And then when I got out, I started going out with her and she says, “I don’t like you because you’re too bossy” and we parted ways.

Swany: I didn’t exactly say the words, “I don’t like you.” I just said you’re very bossy.

Richard: And we kinda went our separate ways.

Swany: I went out to California.

Richard: And I went up to Rockford and was at A&P – Assistant Manager then Manager. Then went into Chicago to work with Hodge (his brother-in-law) who laid carpet.

Ashley: How many years did you have apart?

Swany: I went to Bank of America and met people from everywhere. And went out with people from everywhere. Not engagement – didn’t go to get engaged or anything – not that long. But I get to know a lot of people. And then my parents called and wanted to know if I would to go to Norway with them. So, I came home and went to Norway with them. Spent all my money and couldn’t get back to California for my job which I really liked. So I got a job at Penney’s. And I was working in the window and he came by and asked me to go out with him.

Ashley: Did you become less bossy in that time?

Ashley: (to Swany) Or did you become more tolerant?

Swany: Anyway…it wasn’t long and we went to the movie together.

Richard: Well that was in about January or something. 1955. And we went in March, I think it was, to the drive-in movies. We were sitting there waiting for the movie to start and I guess I asked her to marry me.

Richard: Well, it came around to that anyway. And we decided we would get married. And we went home to her folks and called up Harold who was in the service to see if he would be in the wedding.

Swany: If he could get off.

Richard: Because he was in bootcamp. And he said he would. And we set the date for the wedding then.

Ashley: Do you remember who said I love you first?

Richard: No. I don’t remember. I don’t know if I ever said I love you.

Swany: Before we got married?

Swany: We say it every day after we got married.

Richard: I don’t think I ever said it before.

Ashley: What do you think, Grandma? Do you think you did?

Swany: I’ll tell you this…the letters all say, “I love you.”

Richard: Yea, but I mean, to her face, I don’t remember saying I love you.

Ashley: So it took ’til the wedding for you to say I love you.

Richard: I guess I did that day.

Ashley: Because you said you knew you were in love pretty early on.

Richard: Yea, but I don’t remember saying it out loud.

Ashley: And what is your favorite thing – I’ll start with you, Grandpa – about Grandma?

Richard: She was pretty. That was one of the things. And she wasn’t a hoity toity – she was really down-to-earth. She was my style of a person.

Ashley: What’s your favorite thing about your relationship?

Richard: That we still get along pretty good even though we fight. (laughs)

Richard: That’s a better word, I guess. Because we disagree a lot on cards. (everyone laughs)

Swany: Who wins and who doesn’t.

Richard: She will do what I’d like to do when she really doesn’t want to. That’s some thing. And I think I try to be congenial at times.

Swany: Very kind. He can be very trustworthy.

Richard: Both of us.

Together: There’s never been anybody else.

Swany: We’ve never had anybody else. You were my one and only. (Richard laughs)

Swany: I said he was my one and only.

Ashley: We don’t have to talk about it. (everyone laughs) Okay, my last question is: Would you change anything about your relationship?

Richard: No, because we’re still here.

Swany: We have what we need.

Together: We don’t want for anything.

Richard: Other than our health. And that’s been pretty good for our age.

Swany: And we are very happy with our kids.

Richard: Yes, all of our kids have been very good.

Ashley: Do you have a favorite kid? (Chuck coughs in background.)

Richard: Well I hear something in the background.

Ashley: That was a trick question.

Richard: Norman! [their son who passed away in December 1992]

Ashley: And do you have a favorite grandkid? (everyone laughs)

Richard: In fact, most of those are pretty good.

Swany: Wouldn’t change any of them.

Richard: No, I wouldn’t change any of them.

Ashley: And is there anything else you want to add?

Richard: No, just that we hope we last another 10 years.

One thought on “[Transcript] A Love Story: Richard and Swany”